Cavalaire sur Mer, a little ray of sunshine all year round 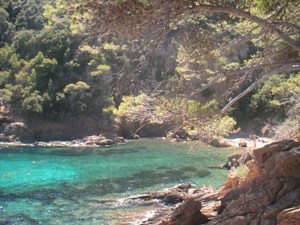 Nestled in the heart of a magnificent bay of the same name, with the Côte d'Azur's clear blue water and almost 4 km of pure white sandy beaches, the town of Cavalaire sur Mer offers visitors an exceptional climate with 300 days of sun per year.

Thanks to this clement, sunny climate, Cavalaire is the ideal setting for tourists looking to explore the region: Ile du Levant, Porquerolles and Port Cros Island, Bormes-les-Mimosas, Saint Tropez, Ramatuelle... astounding scenery not to be missed!

This resort, while more discrete than its neighbours, has plenty of activities on offer, and there's something for everyone to enjoy: microlighting around the bay, excursions to the "Golden Isles", relaxation time in an unspoilt cove, or at the marina... and connoisseurs will enjoy the local specialties served in our restaurants: bouillabaisse, ratatouille, anchoïade dip, tapenade and bourride fish stew

The name of Cavalaire comes from a Greek colony called "Heraclea Cacabaria" which settled in the bay. The name conjures up images of Carthage and the cult of Hercules. The history of this relatively new village stretches back 800 years to the Ligurians, who lived in their Montjean oppidum (fortress).

The Count of Provence, Guillaume I, constructed a look-out tower at Cape Cavalaire to which the Counts of Grimaud added fortifications, which were eventually destroyed in 1646. In the 18th century, Cavalaire became a small fishing hamlet which was under the control of the village of Gassin until 1929.

On 15 August 1944, the allies chose this site for the landing of the US 3rd Infantry Division. Since then, it has become a tourist village with a modern port boasting 1200 spaces, renowned throughout the Mediterranean. Another interesting feature is the Ligurian oppidum relics, inhabited between the 6th and 4th centuries B.C., at the top of Montjean looking over the Cavalaire bay.

We have a whole range of activities for an action-packed holiday!

Why not go for a stroll along the footpaths and appreciate the Mediterranean flora and fauna, embark on a gastronomic journey in the lanes of a Provençal market, or stop off at the media library to discover the region's culture? Cavalaire has a range of activities on offer for you to enjoy during your stay.

In the natural surroundings:

• Cavalaire Market Every Wednesday morning at Place Jean Moulin
• Fish market: Every day from 10am
• Bar and Nightclub
• Casino

How to get to Cavalaire Sur Mer

Take the A8 motorway ("La Provençale")